We’re constantly looking for ways to improve the overall experience we provide not only for Sidetrade applicants, but also for our existing employees. We develop our teams, come up with new positions and broaden our influence on an international scale. Quite simply, no one day is ever the same as the next!

How is technology shaping the jobs of tomorrow? 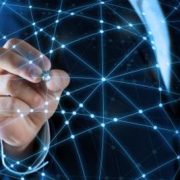 Technology is developing at breakneck speed. Spearheading these technological advancements is Artificial intelligence (AI). It’s set to revolutionize all aspects of our professional lives, starting with the workplace.

Does AI represent a threat or an opportunity for HR departments?

What impact is technological innovation having on our working lives?

Delphine Vantours – Robotics, artificial intelligence, the Internet of Things, and Big Data: all of this technology is set to have repercussions for the labor market. A number of web and data processing roles, such as community management and data science, didn’t even exist a few years back

Innovation is often seen as a threat for the labor market, yet it’s actually a major opportunity. According to a recent study by the Employment Advisory Council in France, the number of jobs under threat from robotics, artificial intelligence and Internet-linked technology, is less than 10%. That said, close to one out of two of these roles is likely to alter dramatically, due a reduction of low-skilled, repetitive work, enabling a greater focus on more value-added activities.

Artificial intelligence represents a genuine opportunity for the labor market.

In your view, will the result of artificial intelligence be the creation of new types of roles?

What challenges does this entail for Human Resource departments?

D.V – The role of the HR department is also destined for big change! Analytics is bringing a new dimension to its role, both in terms of the inter-exchange of information within HR itself and with other levels of the organization. Analytics are a performance lever for companies today. Technology now enables CV analysis to give greater insight into skills, flexibility, ability and learning potential, as well as motivation and performance strengths. Analytics are already being used as a support tool in recruitment and career development in this field is set to incorporate more of the predictive. Predictive analytics are crucial because they’ll empower companies to anticipate. They’re set to become an increasingly valuable asset to HR policy.

Delphine Vantours graduated with a master degree in HR from the Sorbonne University. She has more than 20 years of experience in HR and a real HR expertise which make her a valuable asset for Sidetrade. Delphine Vantours supports the growth and the evolution of Sidetrade by recruiting and fostering loyalty among the very best partners not only in France but also at a global level. Sidetrade is not only a SaaS software editor but also an outsourcing platform, a consulting firm and a Big Data research facility… Every Sidetrader comes from a different environment and shares the company’s values: being driven by a pioneering spirit, striving for excellence and last, but not least, having a taste for foosball!